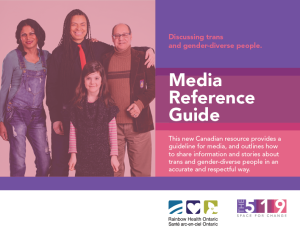 Two Toronto agencies have prepared a guide to help journalists write correctly and respectfully about transgender and gender-diverse people.

The 519, a Toronto LGBT community centre, and Rainbow Health Ontario, a provincewide Toronto-based programme designed to improve access to  services for and to promote the health of Ontario’s LGBT communities, released the guide last month.

The seven-page document, downloadable here as a PDF, provides appropriate and, just as helpful, inappropriate language. The guide’s stated intention is to help journalists write accurately and respectfully, while not confusing readers.

The American Dialect Society voted the singular “they” as its 2015 word of the year.

“DO properly define terms that your readership may not understand,” it advises, and provides a three-page glossary of terms taken from The 519 LGBTQ Glossary, the Trans Pride Canada Style Guide, the Ontario Human Rights Commission and the GLAAD Media Reference Guide. (GLAAD was originally an acronym for Gay and Lesbian Alliance Against Defamation, but the U.S. organization changed its name in 2013 to simply “GLAAD”  so as not to exclude bisexual, transgender and people of other orientations who fall under the LGBT umbrella.)

“The use of the singular ‘they’ is proper in cases where number or gender is indeterminate,” the new guide says. While the singular “they” has been the subject of a long-running debate among language purists, it’s worth noting here that earlier this year, the American Dialect Society voted the singular “they” as its 2015 word of the year.

“The use of singular ‘they’ builds on centuries of usage, appearing in the work of writers such as Chaucer, Shakespeare, and Jane Austen,” the society said. “In 2015, singular ‘they’ was embraced by the Washington Post style guide. Bill Walsh, copy editor for the Post, described it as ‘the only sensible solution to English’s lack of a gender-neutral third-person singular personal pronoun.’ ”

The society also noted the word’s “newer usage” for people who identify their gender as “non-binary.”~TM