Do you see what I see? When you do, you won’t be able to unsee it

That’s the logo for this year’s FIFA World Cup at the left.

According to FIFA, the logo — chosen by a seven-member judging panel from more than 125 submissions — shows three victorious hands together around a soccer ball. The “uplifting humanitarian notion” of interlinked hands are rendered in the yellow and green, with the type below in the blue of the national flag of Brazil, where the 2014 World Cup is being held.

Some people have seen a facepalm. Now do you still the ball? Not likely.

The “can’t-unsee” phenomenon after hearing an alternative interpretation of an image is the subject of a recent article in the Atlantic.  Senior editor Alexis C. Madrigal interviewed Dr. Thomas Toppino (PhD), who lists among his areas of expertise “visual perception of reversible ambiguous figures.”

Dr. Toppino, who is professor and chairman of the department of psychology at Villanova University near Philadelphia, is quoted: “When the scene is encountered again, sensory cues will again identify high information areas, but this time the prior knowledge needed to complete the perceptual act is readily available, and the perceptual interpretation is achieved in a way that seems automatic and perhaps inevitable. 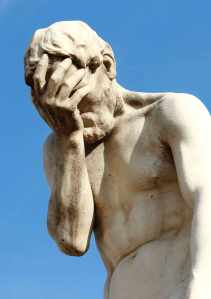 “One general lesson of this demonstration is that perception is not the result of simply processing stimulus cues.  It also importantly involves fitting prior knowledge to the current situation to create a meaningful interpretation.”

In his Atlantic article, Madrigal reviews the literature and interviews other cognitive scientists about what’s at work in the “can’t-unsee” phenomenon, better than I can summarize here, and with many entertaining if less topical illustrations.~TM