Cover of 2011 book of photos released by granddaughter Mariel Hemingway

Ernest Hemingway’s prose style has been described as “spare and economical,” or “terse” by those not so generous.

Now you, too, can write like Hemingway with a new namesake app.

Just surf over to www.hemingwayapp.com, write some text, click on “edit” and your work will be sliced, diced and graded in order to make it “bold and clear.”

But it turns out that Hemingway didn’t always write like hemingwayapp. When New Yorker writer Ian Crouch ran some of the master’s prose through the app, he found that Hemingway violated some of his own rules — he used the passive voice, included adverbs and wrote at a  level higher than Grade 10, suggesting the sentences were too complex and the words too big. 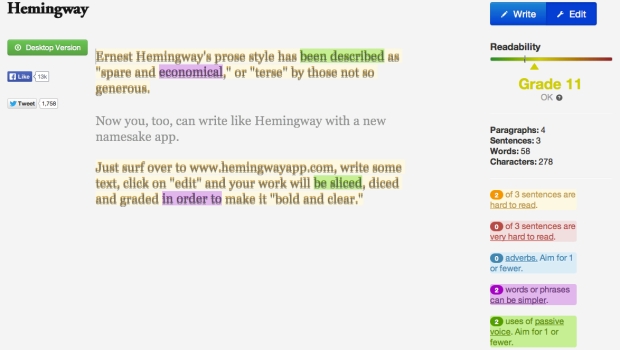 “The Hemingway app is fun to experiment with, and it’s useful in that it calls out in your writing places of friction—allowing you to decide whether they are necessary or merely sloppy,” Crouch writes. “No one is above clarity.

“And the app, based on the experience of running examples of my own writing through it today, is, like a good editor, attuned to the places where vanity seems to be getting the better of things.”~TM