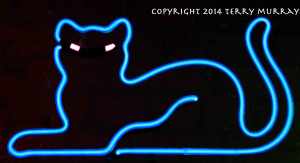 The fur has been flying in Britain with the news that two people in England have developed tuberculosis after contact with a domestic cat infected with Mycobacterium bovis.

Public Health England (PHE) and the Animal Health and Veterinary Laboratories Agency (AHVLA) reported that the cases are linked to the nine case of  M. bovis infection in domestic cats in Berkshire and Hampshire they investigated last year.

PHE offered TB screening to 39 people identified as having had contact with the infected cats as a precautionary measure, of whom 24 accepted screening. Of those, two cases of active TB and two of latent TB were identified.

Both patients with active TB have a strains indistinguishable from those found in the cats, which in turn are the same as the strain identified in “a small number” of infected cattle from nearby herds.

“Direct contact of the cats with these cattle was unlikely considering their roaming ranges,” the release quoted Dr. Noel Smith (PhD), head of the bovine TB genotyping group at AHVLA. ” The most likely source of infection is infected wildlife, but cat-to-cat transmission cannot be ruled out.”

These may be the first reported cases – but probably not the first time cats have transmitted TB to humans. -Dr. Hugh Pennington

The release also quoted Dr. Dilys Morgan, head of gastrointestinal, emerging and zoonotic diseases department at PHE, as saying the cluster of TB in domestic cats was “very unusual” and the agency “has assessed the risk of people catching this infection from infected cats as being very low.”

While the cases are said to be the first reported cat-to-human transmisson of TB, Dr. Hugh Pennington has suggested there may have been previous, although unrecorded, transmissions.

“TB in domestic cats is not new, said Dr. Pennington, writing in the London Review of Books blog.

“It was common in them before the First World War and for many years afterwards. Saucers had been filled with milk from tuberculous cows.”

Dr. Pennington, an emeritus professor of bacteriology at the University of Aberdeen, added that “contracting TB in the U.K. is now rare, and cases are investigated in detail using molecular fingerprinting to find the source.

“But 50 and more years ago fingerprinting had not been developed, and any cat-contracted human cases would have been unremarkable against a background of a relatively high incidence of indigenously acquired TB.~TM