Make up a word — it could wind up in the dictionary 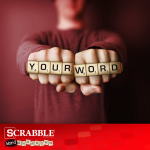 Hasbro, the company that markets Scrabble, has invited players (actually, all and sundry) to nominate a word to be included in the next edition of The Official Scrabble Players Dictionary.

“To keep relevant for today’s fans, Scrabble and Merriam-Webster … have reserved a spot in the dictionary for a word nominated and chosen by Scrabble fans during the Scrabble Word Showdown,” a news release from the company said.

Hasbro seems to have in mind words like “selfie” and “hashtag,” pointing to “changes in technology, trends and pop culture events [that] have introduced many new words” since the last edition of the Scrabble dictionary was published in 2005.

But surely we can do better than that.

For example, when I was a child, I diagnosed my pediatrician as having “cooperotic pox.” I don’t remember exactly what the symptoms were but they did not include pustules or rashes, nor was it even vaguely sexual. (Pronounced COO-per-otic) Note: I have already nominated “cooperotic.”

I am confident that readers of this blog have their own pseudomedicalisms — or any other words you’ve made up, think should be real and/or tried to play in Scrabble and got caught.

To nominate your word, enter it by 28 March on Hasbro’s Facebook page.

Then, on 2 April, Scrabble and Merriam-Webster will announce the 16 words they’ve chosen for a bracket-style “Scrabble Word Showdown,” with fans voting on the Facebook page until one word emerges triumphant.

The winning word will be revealed on 10 April and included in the fifth edition of the official Scrabble dictionary, to be published in  August — making it, if not a bona fide word, at least one that is playable in Scrabble.~TM

Leave a Reply to Word Watch: Round One of the Scrabble Word Showdown | Murray's Review of Medical Journalism Cancel reply